I attempted something that resembled actual sewing. Like, something that’s not just a basic shape or something. Something someone would wear.

AND, here’s the kicker: it turned out resembling what it was supposed to. Dare I say… it’s CUTE!

On a whim, I recently picked up this book from Amazon.com . It’s extremely well-written for the sewing simpleton like myself, and the projects are crazy-adorable. My sister-in-law, who is amazing with knitting, has made my boys some cute knit hats over the years… so I decided my first project from this book would be some hats to give to her and her adorable twin girls.

Now, when people who are actually good at sewing look at this kind of project, they say words like easy and whipped it up and stuff. Well, one day I hope to be at that level. But, I took my time and tried to not screw it up.

It’s actually very forgiving. I think I did a decent job cutting (getting some more practice with the rotary cutter, which I’m starting to love), but somewhere in all the sewing I ended up with a little bit of wonkiness. So, there’s a spot on one hat that bubbled out a tad, but honestly I don’t think it’s that obvious. And by the second hat, I’d figured out my issue, so that one turned out much better. 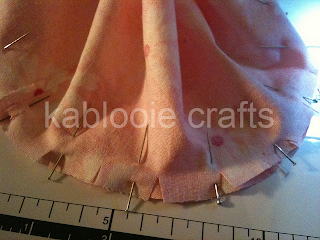 The hardest part was when it came time to attach the sides to the top. Attaching a tube to a circle shouldn’t cause this much worry, but I kept pinning, staring at it , re-pinning, and so on. I got stressed that it wasn’t one flat edge being lined up to another flat edge. But, I finally just started to sew and was amazed that it all lined up okay. It’s sort of magic, and I’m just leaving it at that.

They turned out looking like actual hats. Like, not some lumpy piece of fabric that has a somewhat hat-shape, but an actual hat that you might see in a store or something.

(If you can’t tell, I’m having trouble believing this.)

My family kept asking where the hats came from, and when they’d hear that I made them, they’d say, “she MADE them??” and pick them up to look at them more closely – almost as if they expected to see it was some sort of optical illusion.

When we got home, I was on such a sewing-high (that’s a thing, right?) that I made one more for C.

Ever say a word so much it starts to sound funny?