Skip To Content
The Legend of Zelda Amiibo Case (part 2 of 3: Tutorial: Supplies)

Here is my stab at a tutorial for any of you interested in trying to make this or something similar. It’s more of a walkthrough of how this one was made, than an actual tutorial, but hopefully it will be a decent guide.

Honestly, it’s not all that complicated, just a time-consuming project. Is this the best way this could have been made?? I’m sure it’s not. It’s just what I did! 😁

Please let me know if anything is confusing. A few things I would have done differently and I’ll note them here.

I got mine at Michaels (craft store). It usually retails for $60! But, they almost always have coupon deals and you can get it for 40-50% off of that price. It’s definitely worth it to use a coupon here.

Mine came from Amazon… wherever you can find yours, go for it. The waterproof kind have a clear coating, which makes it easier to stick the vinyl on top of for the symbols. I haven’t tried using the non-waterproof kind.

Color-changing is cool, but not a requirement if you don’t want it.

The nice thing about these lights is that they allow you to cut them at certain spots, so that you can make them fit your project. I had a decent strip of lighting left over.

Not that I’m endorsing a specific brand, this is simply the one I bought:
Relohas Led Strip Light,16.4ft Waterproof LED Flexible Light 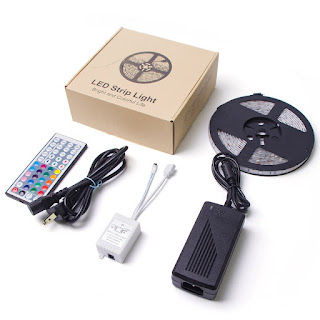 Note: The adhesive that was on these was not strong enough, and the lights started falling off after a few hours. This seems to be a common problem in LED strips. I bought some 3M Scotch 4011 Exterior Mounting Tape to attach them more securely. Probably overkill, but I don’t want to have to keep fixing the lights.
Second Note: The remote for mine stopped working after a day – it was stuck on red. All of my amiibos looked evil. 😮 I notified the company and they sent a new one, free of charge.

I used the following for this case:

I bought some of those little Testors paints in Sand Beige and Rust, and some Testors paint pens in Aged Concrete and Roof Brown. You probably don’t need all of those, but the Rust and at least one tan/brown color.

Orange Glow In The Dark Tape

I found this on Amazon (surprise): Glow in the Dark Luminous Tape (Orange) . You could also use paint if you have a steady hand, but tape was faster and cleaner looking. And of course, it doesn’t NEED to glow in the dark. It’s just a neat extra.

This is to cover up the LED lights with the Sheikah symbols. Matte black blends in with the case background really well so that you don’t have a shiny border. Here’s an Amazon link: Matte Oracal 631 Black Repositionable Adhesive-Backed Vinyl

A Cutting Machine (Silhouette or Cricut)

— or a friend who has one! These are some intricate cuts you’ll need to make.

I found one at fontstruct.com , but there may be others out there.

It seems that Silhouette designer won’t let me export the files into any other format. But, here’s some screenshots that you can perhaps import and trace.